Dare to Live – Finding Joy at Any Age

by Lori Mansell, aka Dancing Grammie

If you have ever been discouraged, stuck in the past, afraid to try something new, sidelined by health challenges (or technology), lonely, isolated, or grief-stricken over the loss of a loved one, this story is for you. It’s time to live! That’s exactly what author Lori Mansell learned to do at age 70 after the loss of her beloved son. This book follows her journey from grief’s isolation and depression to a new season of life, where she finds a welcoming tap-dancing group that takes her under their wing. The group not only teaches Lori to dance but also fills her lonely days with friends and fun. It was then that “Dancing Grammie” was born (and at 92, she still has the legs to prove it!)

Through her wit and unique life experiences, the author welcomes her readers into unexpected situations that likely wouldn’t happen to a person of any age. When was the last time you auditioned for America’s Got Talent at age 90 or were lifted off the ground by a gusty wind during a raging thunderstorm? In fact, the last chapters of this book were written from a hospital bed as the author survived a double fracture in her pelvis that landed her in the ICU on a ventilator. You never know what’s going to happen next when you turn the page.

Dare to Live also introduces the reader to late-life adjustments including becoming a caregiver and also starting an unexpected new career. And did someone say technology? She never gives up after reluctantly saying “Goodbye” to her beloved Royal typewriter at age 87 and diving head-on into computer land creating documents, attempting to find (and send) them, and connecting with friends on what she calls “The Facebook.” The learning and hilarious stories never end, nor does the encouragement for others.

Author Lori Mansell hopes you join her in this courageous journey to Dare to Live.

About the Author
“It’s never too late” is her mantra, and at 92 she’s not slowing down. She is a mother of seven, grandmother of twenty-two, and a retired schoolteacher. But her dream has always been to be a writer. And it happened – at the age of 87! Her writing career began the moment she was crowned Queen of the 2016 Erma Bombeck Writers’ Workshop. Since then, her work has appeared in several editions of the popular Chicken Soup for the Soul series. And what you’re holding now is her first book (but not her last).

When she’s not writing, you will find her tap dancing at local retirement communities as founder of the Prime Life Follies, a volunteer group she and her late husband started in 2003 to bring joy to shut-ins and residents.

You may also catch her dancing and sharing life lessons on “Porchcasts” with her daughter, Julie Osborne. Their goal is to share “Positivity from the Porch,” and they hope you tune in at www.DancingGrammie.com.

At 92, this queen is just getting started! “The best is yet to come.”

3 reviews for Dare to Live – Finding Joy at Any Age 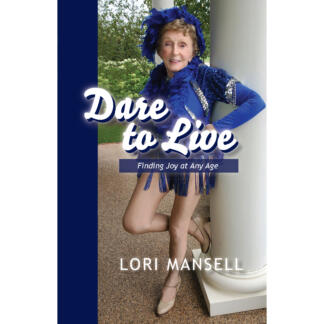