From Stonischken to Gedhus: A Child’s View of World War II

Gerda Braunheim experienced the horrors and trials of World War II as a young girl living in East Prussia. This story is her recollection of what happened when Hitler invaded Europe, and she was forced to flee her home in the train station and leave everything behind. She fled with her brother Willi, her older sister Lilli, an Aunt, and their Grandmother. Landing in a refugee camp in Gedhus, Denmark. Their camp containing 5,000 displaced Germans had no way of communicating with loved ones left behind in Germany, as all communication was suspended for two years.

This story isn’t about political viewpoints or economic impacts of the war, but the impact of the war on the world of a young girl. The book closes with Gerda’s revisit to Stonischken and her immigration to America.

Be the first to review “From Stonischken to Gedhus: A Child’s View of World War II” Cancel reply 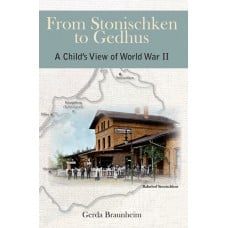 You're viewing: From Stonischken to Gedhus: A Child’s View of World War II $19.99
Add to cart