Peter Field Jefferson: Dark Prince of Scottsville follows the rise and fall of Randolph Jefferson’s most successful son. Nephew to President Thomas Jefferson, Peter Field proved that at least one member of the family had a head for business. The story of his life parallels that of the changing cultural landscape of the James River’s Horseshoe Bend across seven decades—rising from virtual frontier to the establishment of Scottsville in Albemarle County, through the building of the James River and Kanawha Canal, and culminating in the early months of the Civil War. Jefferson’s success as a self-made man is tainted with great personal loss, making his story a distinctively American tragedy.

Lost Jeffersons is a collection of essays which follows descendants of Randolph Jefferson and their kinfolk. Their fates reveal, in part, the genetic decline of one branch of the Jefferson family. A microcosm of Virginia’s gentry, multiple generations of cousin marriage resulted in a concentration of undesirable traits—including alcoholism, idiocy, and insanity—compromising individuals who might otherwise have led productive and useful lives.

After earning her doctorate in cinema studies at the University of Southern California, Joanne Yeck taught and wrote about film history for many years. She is the author of numerous articles concerning Classic Hollywood and American Popular Culture, and is the coauthor of Movie Westerns and Our Movie Heritage. Since 1995, her interest in Virginia history has become a full-time occupation. Years of research resulted in “At a Place Called Buckingham” . . . Historic Sketches of Buckingham County, Virginia (2011) which celebrated the county’s 250th anniversary. In 2010, she was awarded a Jefferson Fellowship at the International Center for Jefferson Studies which supported her research for The Jefferson Brothers (2012), a biography of Randolph Jefferson. In 2015, she released another collection of essays about Buckingham County, “At a Place Called Buckingham” . . . Volume Two. Her blog, Slate River Ramblings, attracts a growing community interested in Buckingham County and its environs. When not exploring the back roads of Virginia, she lives in Kettering, Ohio. Visit Joanne online at joannelyeck.com and slateriverramblings.com. 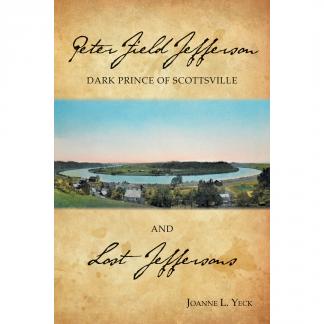