“In minutes they were flying in a magnificent canyon of mammoth icy crags…the ice walls closed in on them, but the wingtips passed with ease as Clare wove the Flying Fortress through the narrows.”

Three fictional young women, each with a connection to a real historic woman flyer, join the Women’s Auxiliary Ferrying Squadron (WAFS) in World War II to fly aircraft for the U.S Army Air Forces. They are destined to fly “the big ones”. Two get a crack at the B-17 – the vaunted Flying Fortress — and all three end up ferrying the mighty pursuit — fighter — aircraft from the factories to the U.S. ports on the Atlantic and Pacific, from which the aircraft are shipped abroad to combat areas. Their access to real leaders in the WAFS gives each of three the inside view of how the war is going and how the program is progressing. Each has her own flight to destiny while in service and, together, the three of them embark on a flight to destiny that will change the post war lives of all three. The real story of the real WAFS is told through the eyes of these three fictional, but very believable characters, as the book follows events from Pearl Harbor, December 7, 1941, through the Victory over Germany May 8, 1945, and beyond.

Be the first to review “Flight to Destiny” Cancel reply 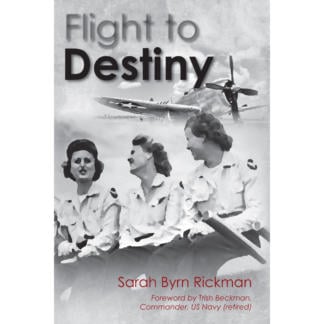