Her Eyes Were On the Stars (hardcover)

In stock (can be backordered)

Written by Jennifer Sommer and Illustrated by Gayle Cobb

As a child, Nancy Grace Roman, moved from home to home. The only constant? The nighttime sky. She loved the stars and knew from a young age that she wanted to become an astronomer. But could she, during a time when many women weren’t even allowed into colleges? Nancy Grace found a way to overcome each barrier placed before her.

Her persistence paid off when she was named the first female executive as Chief of Astronomy at the newly created National Aeronautics and Space Administration, or NASA in 1959. It was here she faced her biggest challenge to date.

Astronomers across the country wanted a telescope that would orbit in space above the Earth’s atmosphere allowing for the clearest view of the stars a telescope had ever seen. The problem? At this early stage of the United States space program, engineers hadn’t even successfully launched a rocket. How would Nancy Grace ever get a telescope into space?

HER EYES WERE ON THE STARS introduces readers to a female scientist in the field of astronomy who will be forever affectionately known as “Mother of Hubble.”

“…is often forgotten by our younger generation of astronomers who make their careers by using the Hubble Space Telescope. Regretfully, history has forgotten a lot in today’s Internet age, but it was Nancy Grace Roman in the old days before the Internet and before Google and e-mail and all that stuff, who really helped to sell the Hubble Space Telescope, organize the astronomers, who eventually convinced Congress to fund it.”

Jennifer Sommer received an M.F.A. in writing for children and young adults from Hamline University and is winner of the Karen and Philip Cushman Late Bloomer Award from SCBWI. She worked as a Children’s Librarian for twenty years and still prefers to read books written for young people. Visit her at jennifersommer.weebly.com and find out more. 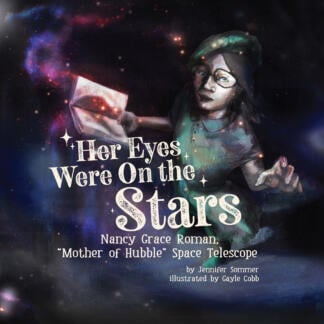