The Con at the Con: The Lost Blaster Disaster

“It’s gone!” “But, it was just here.” “You stole it!” “You stole it from us; it should never have been here!” The iconic blaster from a billion-dollar film franchise, Galactic Guardian, disappeared. The studio representative did not have it. The auction manager no longer had it. The billionaire head of the Galactic Studios wanted his priceless blaster prop found –and now! “Staff,” a Hollywood production designer and former fix-it man for the studio,was tasked with the job. Somewhere,in the Galati-con XI science fiction convention, amid 150,000 people,was the blaster. Evidently,some wiry, techno-wiz geek is planning to sell an authentic blaster. A slinky, seductively stunning tattoo artist is supposedly hiding the true blaster. An arrogant, win-at-any-cost masquerade contestant was seen brandishing the real blaster on stage. Do any of these, or multiple other quirky characters have the blaster? Follow Staff through the bizarre roller coaster of a hunt through a sci-fi convention,for this twisting tale of action and humor to discover, “Are there several blasters, or is this just one big CON AT THE CON?”

Kindle Edition (.mobi), 242 pages, with Original Illustrations by the Author

Be the first to review “The Con at the Con: The Lost Blaster Disaster” Cancel reply 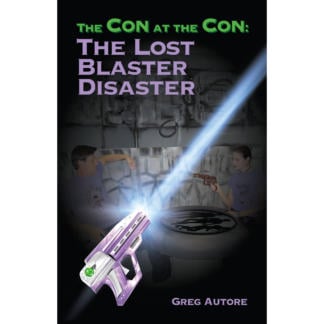 You're viewing: The Con at the Con: The Lost Blaster Disaster $4.99
Add to cart