Milroy the Doofus Builds a Playhouse

There are a LOT of kids on Pope Street. Milroy is one of them. Milroy is an inventor. Every Saturday morning he invents something new and invites his “bestest friend” Alan to test it. His inventions don’t always work out as planned. That’s probably why every kid on Pope Street calls Milroy a “doofus.”

In Milroy the Doofus builds a Playhouse, the young inventor invites all of the neighborhood kids to a party in his backyard. There’s music and dancing and even snacks. But the kids all conclude that Milroy’s party is a “rooky deal.” In the end only Milroy and Alan are left.

Milroy the Doofus Builds a Playhouse is the first in a series of “just-for-fun” books about this amazing kid and his hapless inventions. 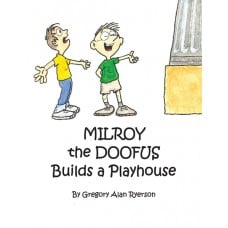 You're viewing: Milroy the Doofus Builds a Playhouse $13.95
Add to cart